Corfu Cuisine – The Kitchen of Tradition

Corfu Cuisine – The Kitchen of Tradition

Corfiot cuisine could be called the kitchen of tradition. Unlike the greek mainland, Corfu didn’t experience Turkish occupation, thus it is not influenced by oriental tastes.

The 400 years of Venetian occupation have left an enormous mark on cooking recipes, but also on food names.

Corfiot cuisine is purely Mediterranean. Oil, pepper, legumes, pasta and vegetables have a common base. However, it has nothing to do with the cuisine of the rest of Greece, not only because of the climatic conditions but also of the old Venetian recipes.

You will surely find moussaka and rustic, but it is worth looking for the traditional cuisine, the story of which begins several centuries ago. So you do not have to leave the island without having tasted some traditional dishes, as they are the ones that will shape your typical culinary experience in local cuisine.
We present some of the hotel guests, which you can taste at many traditional taverns and restaurants of the island.

Pastitsada. It is considered to be a formal and festive meal. This iconic recipe uses cock or calf as a base ingredient. After the meat is cooked with spices, onions and garlic, we add red wine, cinnamon, laurel, nutmeg, fresh tomato, tomato paste and sugar, while the thick spaghetti are thrown. Served with grated parmesan.

Sofrito. The second emblematic food of Corfu is made from thin slices of veal, which after being floured and fried slighlty in a pan, are cooked with white sauce of finely chopped garlic, parsley, white pepper, white wine, salt and vinegar. Served with beans or mashed potatoes. 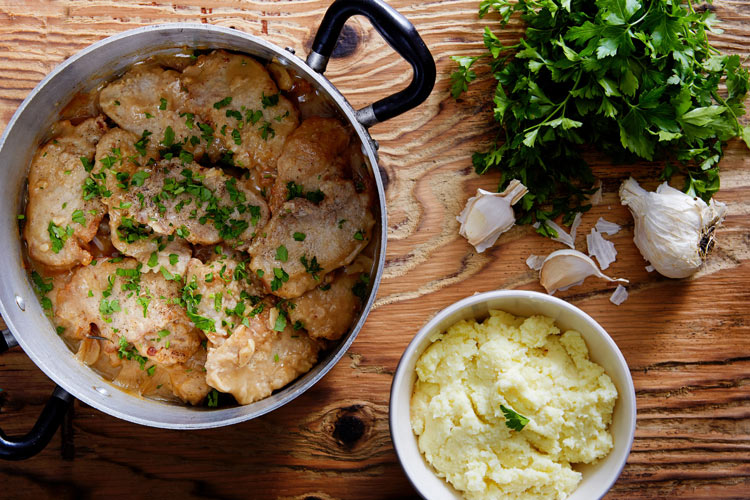 Pastitsio Dolce. Rare recipe of Corfu. Between two layers of dough is a mixture of well-cooked meats (veal, pork, chicken, woodcocks, bacon, sausages) and coarse pasta with grated cheese and dill. The result is an incredible feast of flavors.

Pheasant aubergines. Pancakes of aubergines, sprinkled with cheese in layers cooked in the oven between boiled eggs in slices, pancetta, salami, salted with tomato sauce and basil.

Ayada hake. Stuffed cod with garlic paste. Garlic paste in Corfu has a variation. Except garlic (aglio), bread and oil, peeled almonds and vinegar are added.

Gialletta (Giallo yellow in Italian). Yeast of cornstarch and shrimp flour fried in olive oil and served with powdered sugar and cinnamon.